by edunationPosted on February 19, 2020February 2, 2021
Posted in Teacher developmentTeaching adolescents

Language games from The Tonight Show in your lesson? Yes, yes, yes! This is how you can surprise your adult students!

Phew, it’s hot … No, it is not a line from “The Locomotive”, Julian Tuwim’s famous poem for children, I am simply stating the obvious . It is scorching hot outside and we are at school wiping our weary brows. We need refreshment and here comes – Jimmy Fallon, a host of The Tonight Show, famous for games and sketches with guest participants. “Water War” would be the best game in this weather, but you can’t go round throwing glasses of water on people at school. We have to stick to his language games and, with those temperatures, it will not be difficult. If you teach adults, use these games in your language lessons and if you work with children or teenagers, they may come in handy during form period.

To play this game, you need a collection of funny, unusual objects (have your students bring them) which you place in separate boxes, e.g. a doll in a bowl full of sweets, an apple with a bow tied around it, etc. Two players sit opposite each other. They are separated by a cardboard “wall” with a small window so that they can see each other through it. A player opens one of the mystery boxes, takes out an object and describes it. They can either lie about it or tell the truth . The other player’s task is to guess if they are telling the truth. You can ask additional questions to throw the player off balance.

„Word Sneak”, or mastering the art of conversation

In this game, two players receive five cards each with different words / phrases on them. The cards are placed face down in front of them and the words from the cards must be said in a conversation as seamlessly and casually as possible. Players do not reveal the word; they simply put the card aside once they have used it and then take another card.  An additional challenge could be asking players / other group members to guess their opponents’ words.  If you decide to follow this format, put all the words for one player on one card;  it will make guessing more challenging.

“Three-Word Stories”, or a shared tale

Just like in  “Word Sneak”, each of the two players receives word cards. They take turns to tell a story, but they can only use three words at a time. There’s a mystery word that Player 1 tries to get Player 2 to say within the story the two are telling. If you find it too difficult for your students, increase the number of words they can use.

“Shouting Charades,” or puns without gestures

In classic charades,  you must show all words with gestures. In this game

There are three players in this game, but you can play in pairs, too. Each player places two confessions in two envelopes (or simply on cards) – one true and one false. One player reads the confession from the envelope picked by the other players, who  have about a minute to “interrogate” the player to determine whether the confession is true. If you want, you can give students more time  for “interrogation”. Make sure students’ true confessions are those their classmates do not know about.

There are no comments 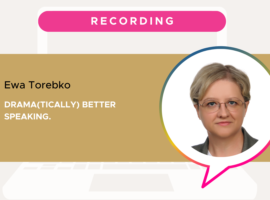 This webinar will show you how to lead your students towards fluency in English, using… 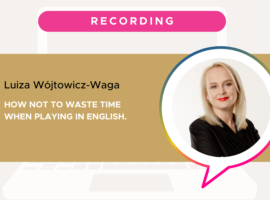 In this webinar Luiza Wójtowicz-Waga will be looking at what defines a good language play. …

This website uses cookies to improve your experience while you navigate through the website. Out of these, the cookies that are categorized as necessary are stored on your browser as they are essential for the working of basic functionalities of the website. We also use third-party cookies that help us analyze and understand how you use this website. These cookies will be stored in your browser only with your consent. You also have the option to opt-out of these cookies. But opting out of some of these cookies may affect your browsing experience.
Necessary Always Enabled
Necessary cookies are absolutely essential for the website to function properly. These cookies ensure basic functionalities and security features of the website, anonymously.
Functional
Functional cookies help to perform certain functionalities like sharing the content of the website on social media platforms, collect feedbacks, and other third-party features.
Performance
Performance cookies are used to understand and analyze the key performance indexes of the website which helps in delivering a better user experience for the visitors.
Analytics
Analytical cookies are used to understand how visitors interact with the website. These cookies help provide information on metrics the number of visitors, bounce rate, traffic source, etc.
Advertisement
Advertisement cookies are used to provide visitors with relevant ads and marketing campaigns. These cookies track visitors across websites and collect information to provide customized ads.
Others
Other uncategorized cookies are those that are being analyzed and have not been classified into a category as yet.
SAVE & ACCEPT